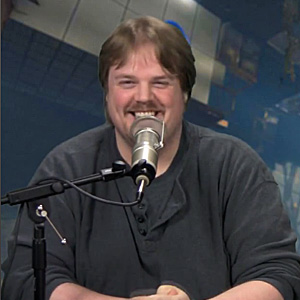 Jeremy Randall was a co-host of Jupiter@Nite, STOked and the FauxShow.

Jeremy also often hosted an "after party" following Jupiter@Nite where he interacted with the #jupiterbroadcasting IRC chat room, and played video games.

Jeremy has previously been a host on Castablasta and worked on Beer is Tasty, appearing as a guest host on occasions when Bryan was away and when on location at the 2010 Washington Brewer's Festival. Jeremy also hosted the Beer is Tasty segment/spin-off with guest host Jesse.

Currently, Jeremy works at Cryptic Studios as a developer of Star Trek Online.

Retrieved from "https://jupiterbroadcasting.fandom.com/wiki/Jeremy_Randall?oldid=4513"
Community content is available under CC-BY-SA unless otherwise noted.